About a month ago I spoke to several activists in the trans community about their work leading up to the introduction of a new federal bill. If passed into law, that bill will ensure human-rights protection for gender identity and gender expression in Canada, and would include those two categories in existing hate-crime legislation.

One of the women I spoke to became emotional during our interview. She was talking about all the work that her generation of trans and non-binary Canadians has had to do, and all the suffering they’ve experienced. But she choked up not because she was remembering all the difficulty she’s been through to get to this point, but because she could now imagine a better future for the young people coming ahead of her.

I thought about that today while reading about 50 people killed at a gay nightclub in Orlando during Pride Month, with just as many hurt and the city desperate for blood donations–ones its own LGBTQ community can’t give because the law prevents it. In spite of all the progress we’ve seen for LGBTQ rights in recent years, including Canada’s new bill and marriage equality in the United States, we still live in a world where a hate crime like this could happen.

It didn’t happen in a bubble. We need to remember that this crime happened in an environment that’s seen about 200 anti-LGBTQ laws introduced in the U.S. so far this year, including many that have passed. Those laws have already made the simple act of using a bathroom demonstrably more dangerous for some people. It happened in an environment where front-running presidential candidates could support those laws, could oppose legislation that provides LGBTQ people with civil rights, and could hire advisors who call gay people evil.

And before anybody thinks Canada gets off the hook, it happened in an environment where many politicians will oppose that new gender identity and expression bill, where the Conservative Party pats itself on the back for just now removing its official condemnation of same-sex marriage, where Ontario is only this year enshrining equal rights for LGBTQ parents and many other provinces haven’t done so yet, and where a Montreal clinic that does gender confirmation surgery was recently attacked in an arson.

I’ve done a fair bit of reporting on LGBTQ issues this year. I always try to keep in mind while I’m doing it that I am writing about a community that is not my own, and it’s important to represent it fairly in my work. I’m glad to be doing that work for editors who care about getting it right–who will ask questions to make sure we’re using the best words, and who will ensure the voices of the people we’re writing about are in the pieces. I don’t claim to have never screwed up, but I know we are trying.

We all need to try harder. I don’t mean LGBTQ people–they’ve been trying for a long-ass time. The rest of us need to do more. I have a few ideas for how we can start.

I am not pretending to have all the answers, or even more than a handful of them. But I felt like I had to at least put a few out there, even if only to remind myself to put them in action as often as possible. If you have more to add, please do. 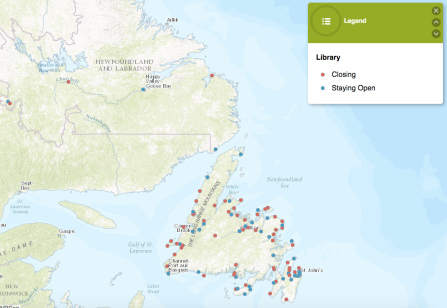 I’ve tried for most of this month to find a home for a pitch about the impact of the pending closure of more than half of the public libraries in Newfoundland and Labrador.

The library closures are just one of the province’s many austerity measures in the most recent provincial budget, which is the current government’s response to the loss of oil-related revenues amidst low global crude prices. But for some reason this one seems to hit the hardest. It might because the cuts are so deep; it would be awful to lose even one library, but nearly 60 per cent of the ones in the province will close. It’s also because this slashing doesn’t actually save much money, from the government’s perspective. The effect on morale for Newfoundlanders and Labradorians, though, is hard to measure but definitely significant.

In the end this landed with Yahoo, one of my regular outlets. I’m happy it did because they were glad to let me go a bit long on it. I also covered the ways that austerity will hurt other parts of the province in an earlier article–one that is still relevant now, after the budget passed a vote in the House this week.

In my freelance work for Yahoo Canada News I’ve been honoured to cover issues affecting the LGBTQ community in Canada. I always try to remember that in my reporting I’m representing a community that I am not a part of, one that has often been done wrong by in reporting. I think these stories deserve coverage and I aim to do it well.

The most recent of those stories is one I wrote yesterday, on the federal government’s bill to introduce protections for trans and non-binary Canadians. I also recently wrote about the work of trans activists in expanding the gender and/or sex options on the next census, and in educating Canadians on how they can register their preferences for the 2016 survey.

Earlier, I wrote about the closure of a trans health clinic at CAMH in Toronto and complaints from the trans community about the methods that clinic used over the years. And early in my time writing for Yahoo, I wrote a feature on the significant barriers to health-care access faced by trans and non-binary people across Canada. What I found in reporting that piece highlights one aspect of why the bill introduced in the House of Commons today is so important.

Canadians are such nerds, and our excitement about the census proves it.

In our defence, the previous government did away with the long-form census a few years ago. The result was outcry from both ordinary Canadians and professionals who rely on the kind of data the census collects. This year marks the return of the mandatory long-form census, which about a quarter of Canadians received in the mail in the early part of the month.

It makes my geeky heart happy to see my fellow citizens get so excited about filling out a government form. The census collects data that is important to have today and in the future. With that in mind, I was particularly glad to write two stories about the census: one this week looking at the uniquely Canadian excitement around Census Day, and another earlier this month reporting on the problems with the form’s sex binary–and what people could do to register their own identities and their desire for wider options in 2021.

This week’s wildfire in Fort McMurray, the resulting evacuation of the entire city, was close to home for me in some ways. I am from Newfoundland and Labrador, a province with strong ties to the northern Alberta city. I lived in Fort McMurray as a child, so I can clearly picture some of the areas that have been burned or are still in danger. And I have family who live there and had to evacuate this week, along with about 80,000 other people, as the fire moved inside city limits.

But in other very concrete ways, the story is quite far from me–specifically, thousands of kilometres away. But such is the journalism industry today that I can live in St. John’s, work for an office based in Toronto, and contribute to a coverage of a story in Fort McMurray. It doesn’t match or replace the important work being done on the ground, in particular by reporters for Fort McMurray Today. But I was glad to share the experiences of those who evacuated with a wide audience as everything unfolded earlier this week, and to highlight some of the good-news stories coming out of an overwhelmingly negative event.